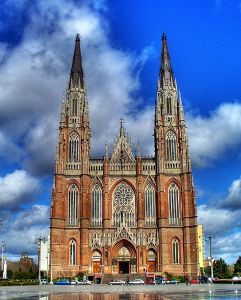 DESPITE THEIR VAST NATURAL RICHES, THE ARGENTINE PEOPLE SUFFER FROM DEEP SPIRITUAL POVERTY.  Argentina is located in South America, and it is home to over 40 million people.  The official language of Argentina is Castilian Spanish. Over 86% of the population claims Catholicism as their religion, although very few even practice it.  Less than 10% of the population identifies with any Bible believing church.  The remaining percentage of the population is comprised of various cults, Agnosticism and Animism.

Spiritual darkness holds an enormous stronghold and is gaining ground with the increase of Mormonism,  Jehovah Witnesses, and Islam.  Argentina is home to the largest mosque in Latin America and its previously minimal Muslim presence has reached over one million and continues to grow.

This is a spiritually starved country, trapped in darkness.  According to Argentine Baptist Associations there are less than 800 Gospel preaching churches in Argentina. That is fewer than one church for every 50,000 people.  There is no Gospel presence in the majority of cities and towns across this vast country.